In November, two members of management at Melvin Brewing were visiting the Bellingham location. They went into neighboring local brewery, Menace Brewing, with cans of their own beer, and opened them. This is an illegal act and potentially puts Menace’s license to serve at risk. When the bartender confronted them, Kirk McHale allegedly groped her.

This story has been simmering in the community for several months. The following Facebook comment is from January 25th and illustrates the way in which people were discussing the incident:

The community waited to see if Melvin Brewing would respond. Then, on March 8th, the following screen shot from Melvin Brewing’s website began to circulate on social media:

This was copy that had been on the Melvin Brewing website for just over a year, according to the company, but it, when coupled with the silence regarding the allegations against their management, was the signal that the community needed. One star reviews regarding the incident and the website copy began appearing on the Melvin Brewing Bellingham Facebook page and on Google.

The company responded by quietly changing the copy on the website, sort of. They neglected to change the webpage title:

And a choice remained on the contact reason drop down menu to “opt in” to a date: 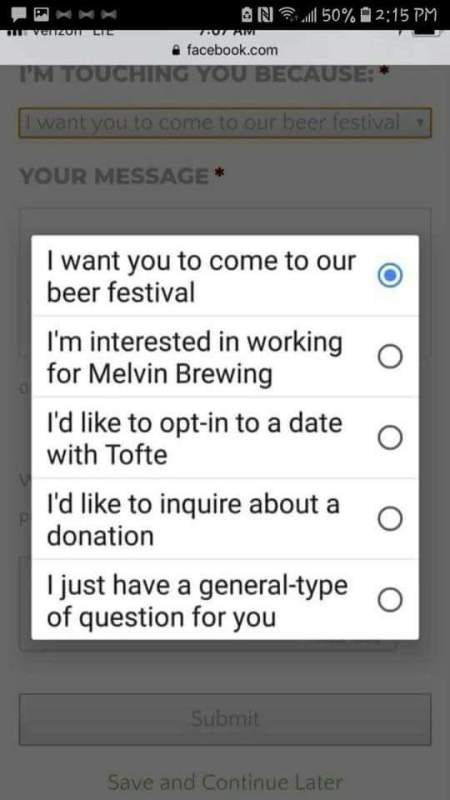 They also posted about an International Women’s Day event:

They then issued a statement on the Melvin Brewing Bellingham Facebook page: 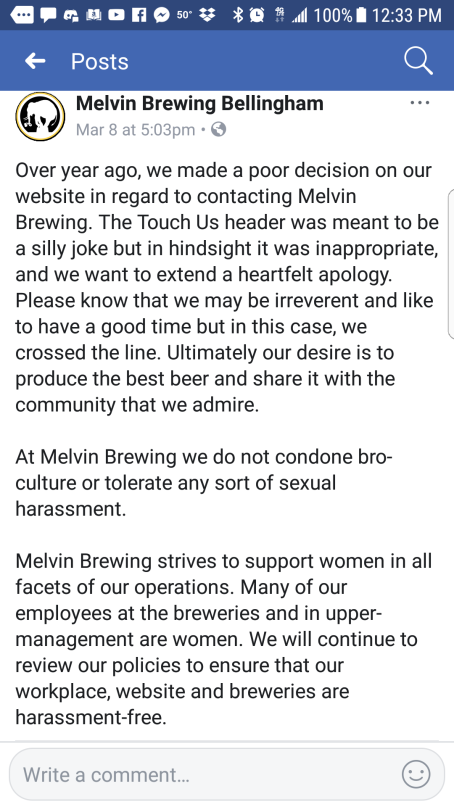 They also began reporting one star reviews for removal. The Facebook page for the main Wyoming location would later post a statement claiming that they only reported abusive posts, but many commenters would state that their review and their accounts were reported even though their one star review included no text, but just a star rating. 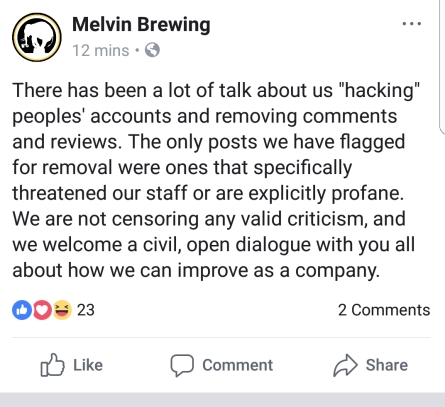 The local Facebook page attempted to distance itself from the incident, claiming that they were not associated with the individual in question. It appeared that they were enlisting employees to add five star reviews in order to push the bad reviews below the fold and hide them from immediate view:

In the meantime, more stories of inappropriate behavior by members of the Melvin Brewing leadership team started to surface online:

These stories were a severe contrast to the message that Melvin Brewing was attempting to communicate: their respect for women and their rejection of rape culture.

In terms of actual action taken, a PR firm for the brewery stated that the situation had been dealt with internally, and that the individual in question would not be included in public appearances and would be required to go through “counseling.”

There’s more, but these are the central facts regarding the events taking place. This situation continues to develop.

Cosmos Bistro opened in 2015 in a space in the Herald Building in downtown Bellingham. It had two owners, Jamison Rogayan and Cinnamon Berg. Rogayan was to be head of the front of house, and Berg the kitchen.

Reports of Rogayan having raped women began surfacing on social media, including Facebook and Reddit. Rogayan was eventually arrested, and Berg responded by barring him from the restaurant and immediately beginning the legal process needed to remove him from the business entirely.

The Rogayan case went to trial, and he was convicted and sentenced.

Berg became the face of Cosmos Bistro, and the brand’s Facebook presence emphasized not just the restaurant’s food, but also the business’s place in the community. Cosmos Bistro hosted community events and referred to its customers as “Cosmonauts.”

Berg took proper action in response to what was arguably a worse situation, and Cosmos Bistro is a thriving business in downtown, with a good local reputation and a dedicated following.

So what was the difference here?

Berg’s response to Rogayan’s rape conviction saved her business. The scandal occurred early in the life of the business, when all businesses and restaurants particularly are vulnerable to reputation damage. But she acknowledged and listened to the concerns of the community and made them her own concerns. She then took responsibility and immediately started to resolve the problem. All the while, Cosmos Bistro’s communications with customers remained positive.

Melvin Brewing on the other hand, downplayed community concerns, tried to distance themselves from the sources of the complaints instead of taking responsibility, positioned themselves in opposition to the community by silencing community voices and by allowing toxic elements of their own fanbase to engage in destructive ways on social media, and failed to offer transparency in dealing with the sexual assault incident when it occurred. The clock was ticking from November, and Melvin, as far as the community is aware, took no action and issued no response until the community came knocking on their door demanding action.

Further, attempts to respond constructively were undercut by the reputations of both McHale and Tofte, and by the copy on their website and the environment created in their Bellingham establishment. Because they had developed a toxic brand personality, they were already behind before the scandal broke.

Additionally, despite the fact that people in the craft beer and brewery spaces have been talking openly about misogyny in the industry, Melvin failed to take responsibility for their part in helping to determine what the culture in that industry would look like. As independent brewers go, Melvin is not a small player. They have the leverage to create spaces where women are safe, but they failed to do so. It is a male-led company, and I’m certain that the safety of women in the brewing  community was never a priority for them until it became a marketing disaster.

Customers in this age of internet transparency have more power than ever to accept or reject brands and entire industries based on the culture they promote. In the age of #metoo, women’s voices are more prominent than they used to be in many industries. Melvin’s arrogance prevented them from understanding this, and they underestimated the ability of consumers to censure them.